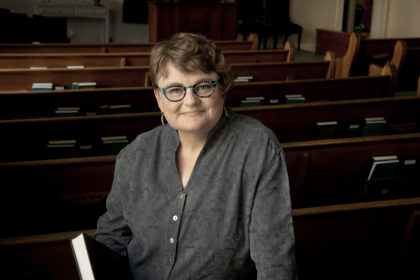 Susan Ritchie has served as Minister of our North Unitarian Universalist  Congregation in Lewis Center Ohio (formerly known as the Dublin UU Church) since 1996.  Previous to that she served as the first (interim) Associate Minister of First UU Columbus, which ordained her in 1995.    She is also Director of the House of Unitarian Universalist Studies at the Methodist Theological School in Ohio, where she also teaches UU history, theology, and polity.  Previously she was Associate Professor of Church History at the Starr King School for the Ministry.

Sharing a solid understanding and enthusiasm for liberal religious identity is important to this life-long, third generation Unitarian Universalist.

Rev. Ritchie is well-published on the topic of Unitarian Universalist history and identity, including many articles, and her book, Children of the Same God: The Historical Relationship Between Unitarianism, Judaism, and Islam.  She is currently working on a new book: Unitarian Pirates of the Carribean: Historical Adventures in UU Polity.

She holds a PhD. in Cultural/Religious Studies from the Ohio State University and a Masters of Divinity from the Methodist Theological School in Ohio.

Rev. Ritchie has also served a six year term on the national Board of the Unitarian Universalist Association; with part of that time as Secretary of the UUA.